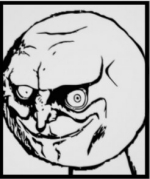 Some nutter named Pascal doing a lap of the peripherique in Paris, France...this video was made in 1990 on a GSXR 1100-K (maybe an L model but doubt it), from what I hear/read the bike had a Devil exhaust system.
You also gotta love the gnarly growl of those old oil-cooled Suzuki motors, shame they got discontinued, anyone who knows bikes will know that the 1989 GSXR-1100K had an awesome motor but handled like a weak kneed hippo, check out the way the bike buffets from side to side as he corners hard, takes some balls to hustle a machine like this @ 156mph (250Km/h)
البحث عن السلام
Voltar ao topo
Responder
1 mensagem • Página 1 de 1